This release requires a few more steps than usual. As we've changed the nixpkgs version, this will also require a lot of redownloading of all packages. Make sure you have good internet and can wait up to 30 minutes to complete the download. We highly suggest to make sure your coffee machine is working before starting the update.

First open default.nix and change the git commit in line 4 to the following:

Check out the docs to get started with haskell language server to get cool IDE features.

I'm trying to model a many-to-many relationship with containers containing items which can belong to multiple containers with the help of a container_items table defined like so:

But I get errors in the Generated/Types.hs file about Couldn't match type ‘Id' "items"’ with ‘UUID’ .

I can get this to work if I have an id column as a pkey on container_items but should that be necessary? Not sure what I'm doing wrong here.

- The image upload recipe has been extended to document how the form needs to look when doing image uploads. - Login error messages are now Invalid credentials - Generated.Types is imported by default in the empty Layout.hs - The Contributing documentation now explains how to run the IHP tests - A bug where the FrontController.hs was generated twice was fixed - The version of morphdom used by IHP has been updated - A new textToId function has been added to simplify conversion of text or bytestrings to db ids - Missing documentation on fetchCount has been added - New recipe: How to generate a random string - New function: sqlQueryScalar similiar to sqlQuery but returns a scalar value - Fixed scripts not working in dev mode - Fixed awk warning when running make static/prod.js

If you haven't looked already, check out the IHP Auto Refresh Demo 🚀

"We don't need no stinking badges!" Haha just kidding. Of course we do! I'm just putting up a link to a PR related to the forum badges in case anyone has any comments/suggestions/improvements.

Back from holiday and trying to catchup on forum posts I thought of some usability improvements.

If you think these improvements make sense I could try to make a PR :-)

I was trying the IHP Cloud beta and had some questions. Also spotted the question by Chris and thought it might be useful to add a IHP Cloud topic to the forum.

Let me know what you think!

I am trying to deploy a test app to ihpcloud. The app is a slightly upgraded version of the ihp blog. Everything goes fine with the linkup to the GitHub repository. Then the deploy button simply gives a hover text saying "We're still preparing your project. This might take up to 30 seconds." There seem to be no way to "get in" to this process. What should I do?

I started learning IHP and after finishing the "Your first project" part in the IHP Guide, I saw how actions where used as routes in two ways:

Changing any of them to the other breaks neither of them

Now, looking at the HSX Guide, it states:

"If the variable is any other custom Haskell data structure: it will first be converted to a string representation by calling show on it. You can add a custom ToHtml (import it from IHP.HtmlSupport.ToHtml) instance, to customize rendering a data structure."

As I looked at the ToHtml class, I reasoned it should probably work in the way, that if there is no ToHtml Instance for a "custom haskell data structure", it will just use the Show instance of ToHtml, which is derived for any generated Controller Actions. I figured, this must mean in the conversion process from hsx to html, there is no explicit use of Show but ToHtml is used for any data, defaulting to its Show instance.

If I'm right, does that mean, that there are generated ToHtml instances for the Controller Actions, which would convert them? A derived Show instance of a normal algebraic data structure would just return the typical string representation said structures, so there must be a conversion to a href-compatible path. I couldn't find the ToHtml instances, but still with or without pathTo, the action gets translated to a path in HSX(Maybe I'm wrong here?). pathTo's usage would be to manually change a path, and if no change of the path is needed, one can just write "{Action}" to get the standard path to it.

Maybe I misunderstand something crucial here, and I would be happy to change that. My future self thanks you!

I'm usually a Stack user who doesn't bother with version bounds or anything like that for personal projects, so I'm used to adding a package to my dependencies and simply letting Stack figure our how to make it work. I tried to do the same thing with Nix and of course ran into issues. Specifically I wanted to use random-fu, so I added it to default.nix and ran make -B .envrc, but it failed to build dependencies. This may just be a random-fu issue and I'm open to other random library suggestions (just need something that randomly chooses an element of a list), but I'd like to know how to deal with this kind of problem in general. Is there a list of packages that definitely work with the rest of ihp? Are there tools similar to Stack's resolver that could be used here?

What is the scope of database transactions? fetch-command ( my guess ), request, session? Is there any way of controling or will there be?

This feature has been contributed by @ruhatch 🎉 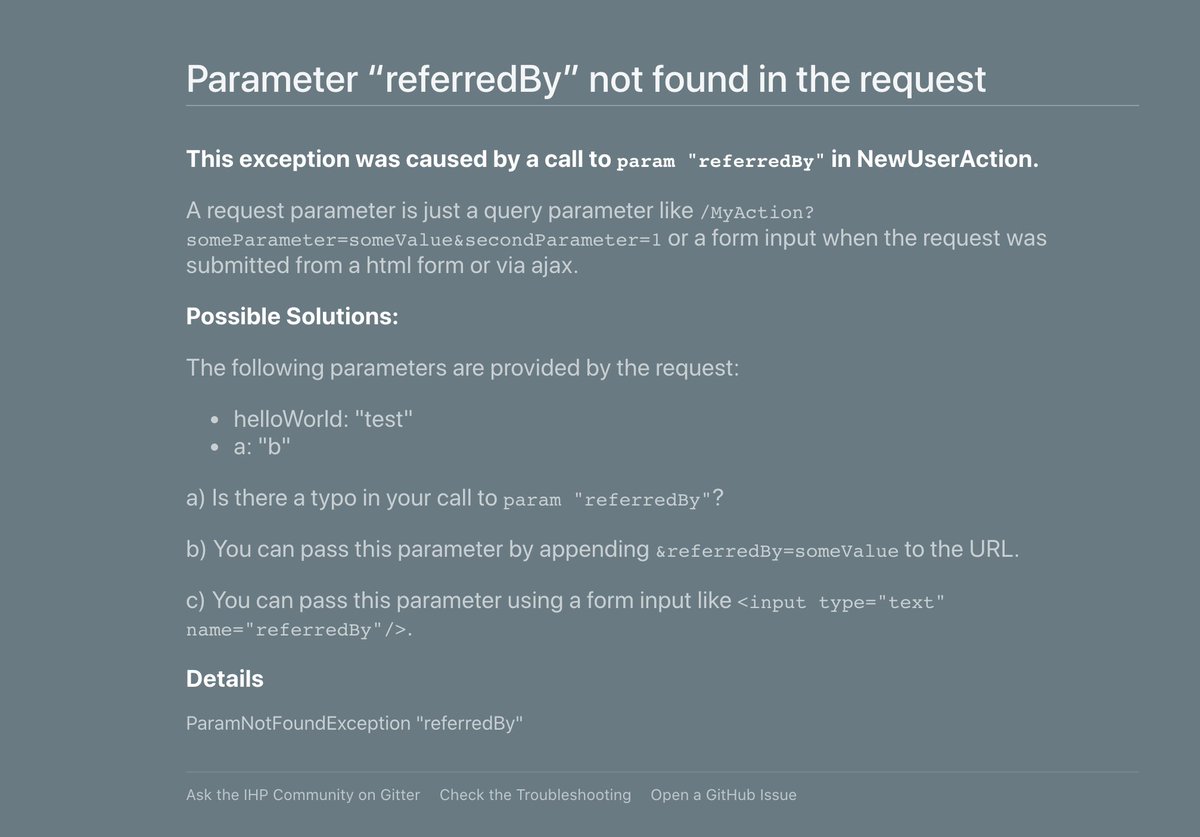 - The primary haskell json library aeson is now exported by the ViewPrelude by default. No need to manually import it in your views anymore. - A code generation issue caused by having a table with two foreign keys referencing the same foreign table has been fixed. - An issue encoding with enums using multibyte characters has been resolved - The CREATE EXTENSION IF NOT EXISTS "uuid-ossp"; is not required in your app's Schema.sql anymore. It's automatically loaded by IHP. - Support for empty attributes in HSX like <input disabled/> has been added. - Grammar fixes - The make target build/bin/RunOptimizedProdServer now correctly depends on build/Generated/Types.hs. The target build/bin/RunUnoptimizedProdServer already has this dependency. - Dotless Emails are now validated correctly - All IHP binaries are now compiled with -threaded. Somehow we missed this. This improves the performance of the dev server. - The default ghci prompt of a IHP is now a lambda symbol - make targets for compiling IHP scripts have been added - a naming issue causing request not being easily useable in actions has been resolved

In case you get a compiler error about a missing field in ModelContext in the auto-generated build/Generated/Types.hs please stop your application and do a clean rebuild:

If you have any problems with updating, let us know on the brand new IHP forum.

Also a short update on IHP Cloud: We're sending out the first IHP Cloud invites in the coming days 🔥

In case nix starts rebuilding IHP (might take a while), make sure cachix is set up as expected:

If you have any problems with updating, let us know on the brand new IHP forum.

If you're curious what we're also working on, click here 🔥

I was just wondering if an "IHP Forum" Topic would be a good idea? That way any suggestions/improvements for the IHP Forum could be discussed there. It might also be a place to raise small bug fixes that are too small to justify a pull request? E.g. I noticed in the EditView thread body is a "textField" rather than a "textareaField" which makes fixing posts tricky.

I'm finding the live loading in the browser sometimes dies while I'm editing the code. My setup is on MacOs Mojave/Firefox and I'm editing the haskell code directly using VI/nerdtree. The IHP development server is still running but I'm getting a log of: StatusServer: Cannot stop as not running and the page formatting in the browser isn't updating.Is there a simple way of restarting the Server without killing the development environment and running the start script again?

I'm just starting to play with this and so far I like what I see, but is there a way to connect to an existing db? I'm not 100% through all the docs yet, so I may have missed it.